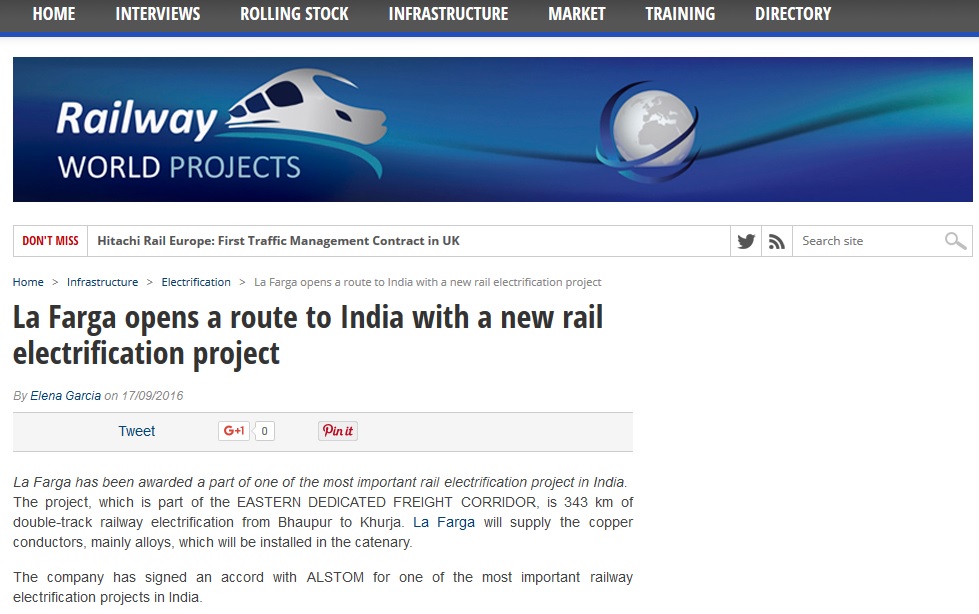 La Farga has been awarded a part of one of the most important rail electrification project in India.  The project, which is part of the EASTERN DEDICATED FREIGHT CORRIDOR, is 343 km of double-track railway electrification from Bhaupur to Khurja. La Farga will supply the copper conductors, mainly alloys, which will be installed in the catenary.

The company has signed an accord with ALSTOM for one of the most important railway electrification projects in India.

The most important rail electrification project in India

This is one of the world’s major rail corridors, and will substantially improve the transport of goods in India. This project is part of a programme that is expected to create a total of 7 corridors with more than 10,000 km of electrification, making it the most important goods network in the world.

It is a very important project for La Farga because it represents the gateway to a market that is strategic for the company. Next year, India is expected to be one of the most dynamic economies in the world, with a growth in GDP of 7.3%. Investment in infrastructure is 1 quintillion US$ and is now the backbone of the country’s economy; a market that is full of opportunities and that gives an increasing importance to the quality of the product and to the sustainability of projects over time.

In the words of Miquel Garcia, General Manager of La Farga Lacambra “This electrification project requires 2,000 km of railway product conductors. We are encouraged by this award, since it is an emblematic work for the Indian market and we want the La Farga brand to become securely positioned in this country. The talks began in March 2015, and today we are reaping the fruit “.