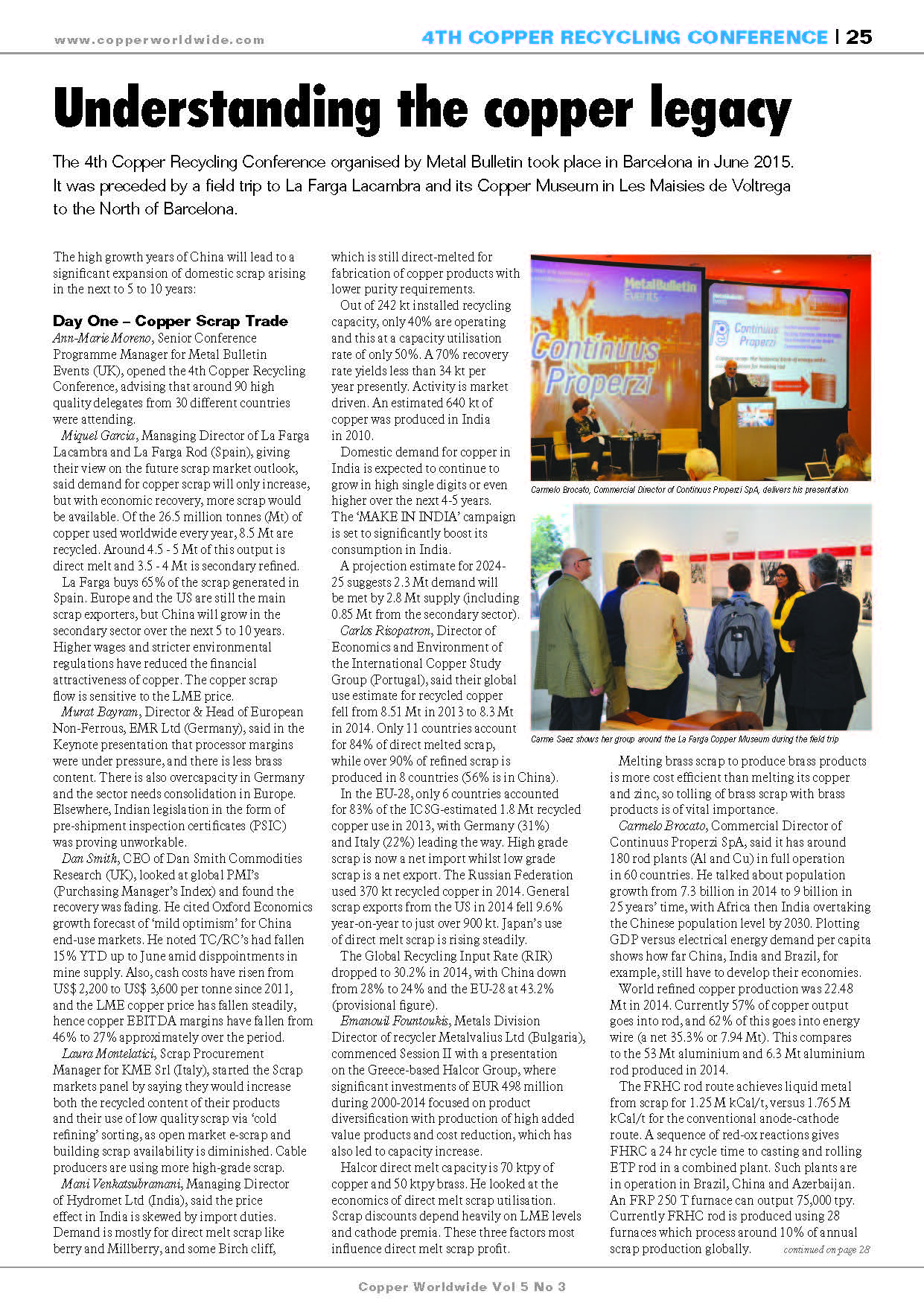 The 4th Copper Recycling Conference organised by Metal Bulletin took place in Barcelona in June 2015. It was preceded by a field trip to La Farga Lacambra and its Copper Museum in Les Maisies de Voltrega to the North of Barcelona.

The high growth years of China will lead to a significant expansion of domestic scrap arising in the next to 5 to 10 years:

Miquel Garcia, Managing Director of La Farga Lacambra and La Farga Rod (Spain), giving their view on the future scrap market outlook, said demand for copper scrap will only increase, but with economic recovery, more scrap would be available. Of the 26.5 million tonnes (Mt) of copper used worldwide every year, 8.5 Mt are recycled. Around 4.5 - 5 Mt of this output is direct melt and 3.5 - 4 Mt is secondary refined. La Farga buys 65% of the scrap generated in Spain. Europe and the US are still the main scrap exporters, but China will grow in the secondary sector over the next 5 to 10 years. Higher wages and stricter environmental regulations have reduced the financial attractiveness of copper. The copper scrap flow is sensitive to the LME price.

Murat Bayram, Director & Head of European Non-Ferrous, EMR Ltd (Germany), said in the Keynote presentation that processor margins were under pressure, and there is less brass content. There is also overcapacity in Germany and the sector needs consolidation in Europe. Elsewhere, Indian legislation in the form of pre-shipment inspection certificates (PSIC) was proving unworkable.

Dan Smith, CEO of Dan Smith Commodities Research (UK), looked at global PMI’s (Purchasing Manager’s Index) and found the recovery was fading. He cited Oxford Economics growth forecast of ‘mild optimism’ for China end-use markets. He noted TC/RC’s had fallen 15% YTD up to June amid disppointments in mine supply. Also, cash costs have risen from US$ 2,200 to US$ 3,600 per tonne since 2011, and the LME copper price has fallen steadily, hence copper EBITDA margins have fallen from 46% to 27% approximately over the period.

Laura Montelatici, Scrap Procurement Manager for KME Srl (Italy), started the Scrap markets panel by saying they would increase both the recycled content of their products and their use of low quality scrap via ‘cold refining’ sorting, as open market e-scrap and building scrap availability is diminished. Cable producers are using more high-grade scrap.

Mani Venkatsubramani, Managing Director of Hydromet Ltd (India), said the price effect in India is skewed by import duties. Demand is mostly for direct melt scrap like berry and Millberry, and some Birch cliff, which is still direct-melted for fabrication of copper products with lower purity requirements. Out of 242 kt installed recycling capacity, only 40% are operating and this at a capacity utilisation rate of only 50%. A 70% recovery rate yields less than 34 kt per year presently. Activity is market driven. An estimated 640 kt of copper was produced in India in 2010.

Domestic demand for copper in India is expected to continue to grow in high single digits or even higher over the next 4-5 years. The ‘MAKE IN INDIA’ campaign is set to significantly boost its consumption in India. A projection estimate for 2024- 25 suggests 2.3 Mt demand will be met by 2.8 Mt supply (including 0.85 Mt from the secondary sector).

Emanouil Fountoukis, Metals Division Director of recycler Metalvalius Ltd (Bulgaria), commenced Session II with a presentation on the Greece-based Halcor Group, where significant investments of EUR 498 million during 2000-2014 focused on product diversification with production of high added value products and cost reduction, which has also led to capacity increase. Halcor direct melt capacity is 70 ktpy of copper and 50 ktpy brass. He looked at the economics of direct melt scrap utilisation. Scrap discounts depend heavily on LME levels and cathode premia. These three factors most influence direct melt scrap profit. Melting brass scrap to produce brass products is more cost efficient than melting its copper and zinc, so tolling of brass scrap with brass products is of vital importance.

Carmelo Brocato, Commercial Director of Continuus Properzi SpA, said it has around 180 rod plants (Al and Cu) in full operation in 60 countries. He talked about population growth from 7.3 billion in 2014 to 9 billion in 25 years’ time, with Africa then India overtaking the Chinese population level by 2030. Plotting GDP versus electrical energy demand per capita shows how far China, India and Brazil, for example, still have to develop their economies. World refined copper production was 22.48 Mt in 2014. Currently 57% of copper output goes into rod, and 62% of this goes into energy wire (a net 35.3% or 7.94 Mt). This compares to the 53 Mt aluminium and 6.3 Mt aluminium rod produced in 2014. The FRHC rod route achieves liquid metal from scrap for 1.25 M kCal/t, versus 1.765 M kCal/t for the conventional anode-cathode route. A sequence of red-ox reactions gives FHRC a 24 hr cycle time to casting and rolling ETP rod in a combined plant. Such plants are in operation in Brazil, China and Azerbaijan. An FRP 250 T furnace can output 75,000 tpy. Currently FRHC rod is produced using 28 furnaces which process around 10% of annual scrap production globally.

Gianluca Cusano, BREFs author at EIPPCB, Institute for Prospective Technological Studies – JRC, began Session III by presenting the Revised Best Available Techniques (BAT) Reference Document for Non-ferrous Metals Industries (NFM BREF), with a focus on secondary copper producers. Prevention and reduction of all forms of emissions in the production and processing of metals via the technically-based BREF is the aim. BAT conclusions are the reference for setting permit conditions, and a four year review period exists. The relevant conclusions BAT 18, 20, 22, 26 and 40 as applied to copper production emissions prevention and monitoring, and current standards, were outlined. These are due to be finalised in 1Q 2016.

Marc Blasco, Area Manager Spain for Steinert Elektromagnetbau GmbH, showed their automated processes for pre-sorting and  reprocessing scrap. Their Cologne test centre can demonstrate and be ‘test-run’ on many different scrap streams. Selective sorting can
be realised through selective sensors that are directly able to differentiate between different materials, e.g. copper from heavy metals via
x-ray fluorescence. Their combined computercontrolled sorting system KSS was also outlined, comprising laser (shape and size), camera (colour) and induction (metal) sensors, for separation of wire and PCBs, for example.

Timm Lux, Head of Marketing & Sales - Copper Division, Andritz Maerz GmbH, closed day one with an overview of their WEEE-to- Copper Process package. Andritz MeWa deals with end-of-life electronics, whilst Andritz Maerz handles melting and refining stages. Here shredded PCBs are fed into an Andritz Maerz TBRC, from which blister copper, a low grade boards concentrate (through the Andritz MeWa WET isperser and Separator), and further scrap are further processed in a Maerz elliptical furnace to produce a precious metals rich anode and slag. The energy-saving elliptical furnace is defined in a 30 to 100 T capacity range so far. Its inner refractory design allows a deeper bath, so the deeper tuyeres resulting can generate around 60% reduction reaction efficiency (other methods are typically <40%), and a final
oxygen content of <50 ppm is possible. The new furnace is more energy efficient than even a much larger tilting furnace, and a 100 T
model installed with an oxygen/gas burner requires less than half the energy cost on the burners. Finally, Andritz Metals covers process gas cleaning.

Day Two – China in focus - Earlier speakers had said that in China’s new normal’ economy, more sorting will be needed in future. There has been a 20% fall in Chinese copper scrap imports since 2012. Scrap imports were further down 9% year-to-date on 2014 levels, reaching a six year low in the first quarter, whilst copper concentrate imports are at historic high level.

Liu Jianmin, Chairman of China National Resources Recycling Association, (stand-in presenter) began the second day saying China generated 2.95 Mt of copper scrap in 2014, and imported a further 4 Mt scrap. The country’s 2014 copper output was 17.8 Mt, so the above is 39% of output, and set to become 40% in 2015. Most processing takes place in the Eastern Provinces, via pyrometric processing. Liu’s presenter said environment-friendly high-tech enterprises have become the main economic development driver for the coming future. Many local copper recyclers were attempting a high-speed increase, but changes must be made to adjust to the ‘New Normal’. For example, General Customs started the Green Hedge Action in 2013, which lasted for 10 months to reinforce the regulation of solid scrap. Green Hedge has had a severe effect on the illegal solid waste business.

Michael Lion, Chairman & Director, Sims Metal Management Asia Ltd, said the US exported 18% of global copper scrap by volume from 2004-2013, while China imported 63% of the volume in the same period. Incentives for scrap collection and large scale processing facilities are needed. Norbert Zonneveld, Executive Secretary, EERA, said its members treat 2.2 Mt WEEE annually. Figures indicate the WEEE generated is three quarters of what has been put on market (POM). What is collected and officially reported is half of what has been generated, and reported WEEE treated and reused is one third of that generated. Most EU countries fell well short of recovery rates in 2012. Declining revenues mean higher costs under Extended Producers Responsibility. Use of standards as a ‘driver’s licence’ for operators would lead to better collection and treatment. Product design and processing innovation is also needed.

Daniel Seager, Take Back and Recycling Operations Manager for Hewlett Packard, said they sell four products a second and recovered 157 kt of products in 2014. The EU WEEE Directive looks for >4 kg per capita recovery annually. Only Norway, Sweden and Denmark have reached double figures. Studies indicate around 10% of WEEE is unsorted (potentially landfill), 35% goes through scrap dealers, and maybe 20% is exported, mainly for re-use. The way the ICT industry is developing also has and will impact on the type and availability of scrap, with new emphasis on centralised infrastructure and new ownership, for example.

Alessandro Casini, Sales Manager Refining Services – Recyclables for Umicore Precious Metals (UPMR), made the final presentation bout its services for recovery of 17 different metals. Their overall capacity is 500 ktpy. The 2017 estimate for PCs is 1 Mt to be POM. All need to adapt to thrive with declining volumes, declining precious metal contents and changing devices, and address losses in collection and pre-processing. The added value of each processing step must be scrutinised. Modern, high quality end-processing of e-scrap is clean tech.