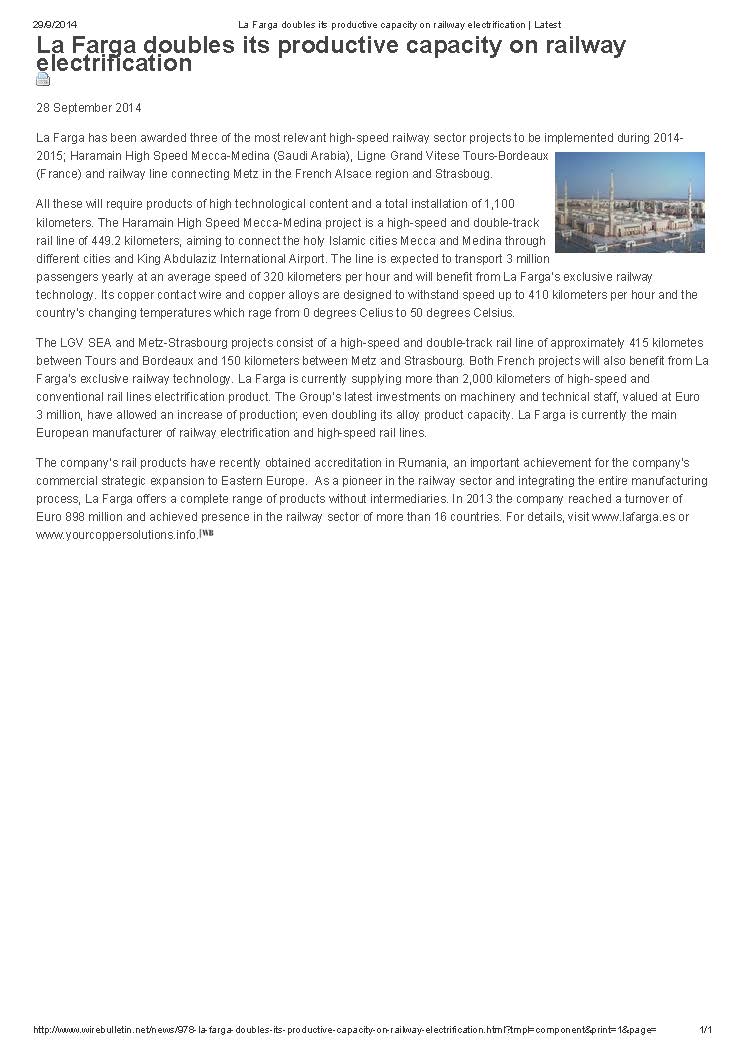 All these will require products of high technological content and a total installation of 1,100 kilometers. The Haramain High Speed Mecca-Medina project is a high-speed and double-track rail line of 449.2 kilometers, aiming to connect the holy Islamic cities Mecca and Medina through different cities and King Abdulaziz International Airport. The line is expected to transport 3 million passengers yearly at an average speed of 320 kilometers per hour and will benefit from La Farga’s exclusive railway technology. Its copper contact wire and copper alloys are designed to withstand speed up to 410 kilometers per hour and the country’s changing temperatures which rage from 0 degrees Celius to 50 degrees Celsius.

The LGV SEA and Metz-Strasbourg projects consist of a high-speed and double-track rail line of approximately 415 kilometes between Tours and Bordeaux and 150 kilometers between Metz and Strasbourg. Both French projects will also benefit from La Farga’s exclusive railway technology. La Farga is currently supplying more than 2,000 kilometers of high-speed and conventional rail lines electrification product. The Group’s latest investments on machinery and technical staff, valued at Euro 3 million, have allowed an increase of production; even doubling its alloy product capacity. La Farga is currently the main European manufacturer of railway electrification and high-speed rail lines.

The company’s rail products have recently obtained accreditation in Rumania, an important achievement for the company’s commercial strategic expansion to Eastern Europe. As a pioneer in the railway sector and integrating the entire manufacturing process, La Farga offers a complete range of products without intermediaries. In 2013 the company reached a turnover of Euro 898 million and achieved presence in the railway sector of more than 16 countries. For details, visit www.lafarga.es or www.yourcoppersolutions.info.